The University of Nebraska at Kearney (UNK) is home to The Thompson Scholars Learning Community Program (TSLC) – a grant-based scholarship awarded to low and middle income students. The mission of the private scholarship is to develop these bright minds, from a holistic perspective, to be engaged citizens upon graduation; thus they focus heavily on academic, civic, and social development.

Serving students in their first and second years, The University of Nebraska at Kearney felt the TSLC program was missing a component that would round out their success equation. While they found ways to engage first-year students, they were concerned their second-year students were being lost in the shuffle. Upon reviewing their goals, they heard about Inceptia’s financial education solution, Financial Avenue.

After further exploring Financial Avenue’s learning objectives, Jennifer Harvey, program director, knew it was the right fit for her students. Financial Avenue’s focus on connecting personal finances with academic performance and career preparation would tie in perfectly to their second-year track, while also serving as an added retention element for students who may be feeling the financial pinch of attending college.

Upon review, the T SLC staff identified three courses that best suited their second-year objectives: Psychology of Money, Foundations of Money, and Earning Money. In addition, being a grant-based program, data mattered! Knowing that Financial Avenue provided real-time data on pre and post-course knowledge gain, the efficacy of the program could easily be captured for reporting purposes.

“Financial Avenue was a good fit for us because it was easy to integrate into what we were doing. For our students, it wasn’t a huge time commitment, but it’s something we’re continuing to have conversations with students about long after they complete the courses,” said Harvey.


A Course of Action

The second-year TSLC students were required to complete all three Financial Avenue courses by the end of the fall semester. UNK’s requirement was initially met with reluctance from students who were quick to warm to the program once they realized its benefits. “My first reaction was ugh, another course I have to take,” laughs a TSLC student. “But after I went through all the courses, it was interesting.”

A fellow classmate, made changes to his financial habits that were evident even to his family. “My mom noticed that I bought a calendar and wrote down when bills were due and how much I could spend. It’s probably the most accomplished thing I’ve done with money.”

A fellow classmate, made changes to his financial habits that were evident even to his family. “My mom noticed that I bought a calendar and wrote down when bills were due and how much I could spend. It’s probably the most accomplished thing I’ve done with money.”

UNK’s selection of the three required courses has much to do with this positive student feedback. The Psychology of Money course, the one cited most often by the students, was chosen specifically for its exploration of the mental processes that go into financial decision-making and how users can retrain their brains for more desirable outcomes. That set the foundation for the additional courses, with a focus on banking, saving, setting goals, preparing for a career, and professional income.

Since 2015, 532 Thompson Scholars have completed close to 1,600 courses with an average knowledge gain increase of 35 percent across all courses. Serving as a vital piece of data, these numbers helped confirm with statistical significance that Financial Avenue is effective. “We’ve got something we can report on from an assessment perspective, which is huge in student affairs, where we’re looking for ways that we can make intentional deliverables to students with good outcomes,” says Harvey.

“I’m anticipating now that we’ve built our second-year program, students will have a sense that the building blocks we gave them really fit into making good long-term decisions. So financially, it may be, ‘I didn’t think about the career I was selecting and how finances would affect that. Maybe I need to be more thoughtful, not just about a major, but about a career and what lifestyle that will lead me to,’” adds Harvey.


Assistance Beyond the Student Component

“Working with Inceptia has been a really positive experience for us,” notes Harvey. “There was great customer support with the product, and it has been there since day one. That was helpful knowing it wasn’t going to put another burden on staff members – there was somebody else who could answer students’ questions. That made it an easy product to work with.” 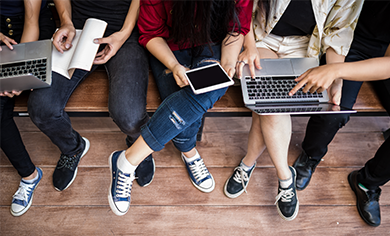 Attempts to engage first year students are plenty – but what about second year students? Can there be a unique solution to reach out to these students so they don’t get lost in the four-year shuffle?

The depth of courses in Financial Avenue is a perfect solution for students beyond the first year, helping them develop critical life skills at a time when they have increased capacity to receive the information and apply what they learn in real time.

The University of Nebraska at Kearney is a public, residential university with students from all 50 states and over 50 foreign countries. It offers 120 undergraduate majors, 22 pre-professional programs, and 27 graduate programs.

Request Resources
Please fill out the form below and click submit. A PDF of the success story will be delivered to the email address you provided.
Find my representative